Leader Notes
“All Scripture is God-breathed and is useful for teaching, rebuking, correcting, and training in righteousness.”  2 Timothy 3:16a (NIV)

Today we observe Reformation Day in honor of Martin Luther and other Christians who removed false doctrine and destructive practices from the Christian church.

Because the Roman Catholic Church was desperate to raise money to complete St. Peter's in Rome during the Middle Ages, many clergy used fear as a tool to obtain money from poor and unsophisticated people. They told the people that they had to pay money to the church so that their sins and the sins of their families might be forgiven. The people bought pieces of paper called pardons and indulgences from the church so that they could believe that they would go to heaven when they died.

Luther was deeply disturbed by these and other abuses in the church. At the same time he was aware of his own sins and imperfections, and he tried very hard to make himself into a person that he thought God would like. The harder he tried, the worse he felt. He thought he was growing farther and farther away from God, and that it was becoming impossible for God to like him at all.

In despair, he began a deep study of the Bible, especially the letters in the New Testament that were written by Paul, most of all the letter to the Romans, and he began to understand what Paul had told the early Christians over a thousand years before.

In his preaching and writing, Luther began to emphasize two main points: justification by faith and the priesthood of all believers.

Justification by faith means that Christians can never earn God's love or forgiveness. All that Christians must do is to accept God as God, and God will love and forgive and cherish them.

The priesthood of all believers means that every Christian has his or her own personal relationship with God, reading the Bible and worshiping in his or her own language, and praying directly to God without anyone's going in between.

So Protestant Christians give thanks to God on this day for the opportunity to lead lives of faith, instead of lives of fear.

Boast of the Most!
Have four bowls (2 bowls across the room, 2 bowls close), 2 tablespoons and 2 bags of pinto beans.
Fill the two of the close bowls evenly with pinto beans.
Form two teams for a relay.

Teams must fill their "far" bowl as much as possible with just a spoon, no help from hands! The team with the most beans wins...yea!

But, in a moment of frenzy the teacher gives all, yes, all the beans to the losing team!! Oh no, did they work for the beans? No! They were a gift, just like our salvation, or else we would boast about it!

Bible Story
Have you ever stopped to wonder how good God is towards us? When you consider all His blessings, which He richly showers down upon those whom He has saved, we could only begin to scratch the surface. God is so good to us and He pours out so much grace in our lives.

In our lesson today, we get a beautiful explanation of why salvation is our greatest need. Not only do we see our need, but we see how God has met that need for us. As the Apostle Paul writes to the Christians in Ephesus, they are reminded of the spiritually dead condition of their past, and of the new life that is now theirs because of what Jesus did for them. We will learn that we should never take this for granted.

EPHESIANS 2:1-3
And you He made alive, who were dead in trespasses and sins, in which you once walked according to the course of this world, according to the prince of the power of the air, the spirit who now works in the sons of disobedience, among whom also we all once conducted ourselves in the lusts of our flesh, fulfilling the desires of the flesh and of the mind, and were by nature children of wrath, just as the others.

Non-Christians do not understand God, for they cannot grasp the concept that God’s Holy Spirit lives inside of Christians (1 Corinthians 2:14). Yet before we knew God, we were spiritually dead and unable to understand the spiritual things of God. Someone who is spiritually dead has no communication with God and lives a life that is totally separated from Him. Sin has killed us spiritually, and because of it, unbelievers are dead to God (Colossians 2:13).

The fact that all people, without exception, commit sin proves that they are in the sinful nature. In our Bible passage, we see that there are three forces that encourage mankind in his disobedience. The world, the devil, and the flesh all influence mankind to turn from God with an attitude of pride and rebellion.

Does this mean there are any good people who are not Christians? There are many people who do good to others and compare themselves to criminals. From a human perspective, we would say they are very good indeed. But on God's absolute scale, no one is good enough or absolutely perfect. Even the nicest and best person will not be perfectly holy. There will be some mistake or sin that they will make. Sinful man can not stand before a holy and righteous God without blame. Only through uniting our lives to Christ’s perfect life can we become good in God's sight.

EPHESIANS 2:4-7
But God, who is rich in mercy, because of His great love with which He loved us, even when we were dead in trespasses, made us alive together with Christ (by grace you have been saved) , and raised us up together, and made us sit together in the heavenly places in Christ Jesus, that in the ages to come He might show the exceeding riches of His grace in His kindness toward us in Christ Jesus.

Now comes the good news! We have looked at the hopeless condition of sinful man, but God has revealed His great love and mercy, so we no longer have to live under the power of sin. The little, tiny phrase “but God” changes everything for us. We see that it is God who provides for us the answer to our problem of sin and separation from God.

We learn that Jesus Christ destroyed the penalty of sin and its power over our lives on the cross. Jesus died that we might live.

Before we are Christians it is hard to understand God's mercy and love because we are separated from Him. It is hard to imagine the horrifying existence of Hell for eternity. God never intended anyone to spend eternity in Hell. So He made a way that no one would ever have to go to that terrible place. Out of His mercy and love He provided salvation through His Son, Jesus. The Bible says that WHOEVER will believe in Jesus will be saved.

The Story of the Reformation
Martin Luther was just a regular person—like you and me, but he saw the whole world change in his lifetime, and he had a little something to do with it.

When Luther was alive, the churches didn’t teach that people should trust only Jesus to be saved from Satan, sin, and death.  Instead, they taught that people needed to do special works, touch special objects  (like one of Peter’s teeth or the wood from the cross), or even pay money in order to be saved from sin (or have their family go to heaven).

This is not what the Bible teaches, but that was another problem.  When Luther was alive, people did not have Bibles in their homes like we do, because the Bible was only in one language, Latin, and that was a language that most people couldn’t read.

In the 16th century, Martin Luther and other men called “the Reformers” helped the church find its way back to the Bible and back to Jesus and his work on the cross.

On Halloween night, October 31, 1517, Martin Luther posted a list of 95 things that needed to change on the door of his church in Wittenburg, Germany.  People read what he wrote, and they began to see that the church had turned away from Jesus and his Bible.

Soon (and with Martin Luther’s help), the Bible was written down in languages that everyone understood—like English, German, and French.  And very soon there was a whole movement of churches that believed that salvation from Satan, sin, and death comes only from Jesus.


Bible Challenge
“All Scripture is God-breathed and is useful for teaching, rebuking, correcting, and training in righteousness.”  2 Timothy 3:16a (NIV)

Activity Ideas
Bible Smuggling Relay
During the Reformation, it was illegal to print a Bible in a language that people could read.  So, the Reformers often had to hide Bibles from church leaders and sneak them to the people so that they could read them.

Activity: Divide kids into two teams.  Have one representative from each team put on an oversized pair of pants over their clothes.  The team will work to stuff a stack of Bibles into the pants.  Then, the two representatives will race around a cone and back.

If time, you can choose new teams and do the race again.

Wittenberg Door
The Reformation started when Martin Luther hammered a piece of paper to the church door in hometown of Wittenberg, Germany.  This was a list of 95 things that needed to change about the church.

Activity:
Using the door in your classroom, label it Wittenberg Door.
Prepare half-page coloring sheets with statements like:
“We are saved by Jesus alone,”
“The Bible in our own language,”
“Jesus is all we need.”
Then have the kids put the sheets up on the door with tape.

Activity:
One at a time, each child is blindfolded and handed a beard with tape on the back. The blindfolded child is then spun around twice. The child then sets off to try and attach the beard. The player who pins their tail closest to the target, wins.

Luther’s Rose Coloring Sheet
LUTHER’S ROSE
One of the symbols of the Reformation was Luther’s Rose. Each layer represents a part of the salvation we’ve been given in Jesus:


Closing Activity
Gather children around you.
Close by saying: Thank you God for loving us every day. In Jesus name we pray. Amen. 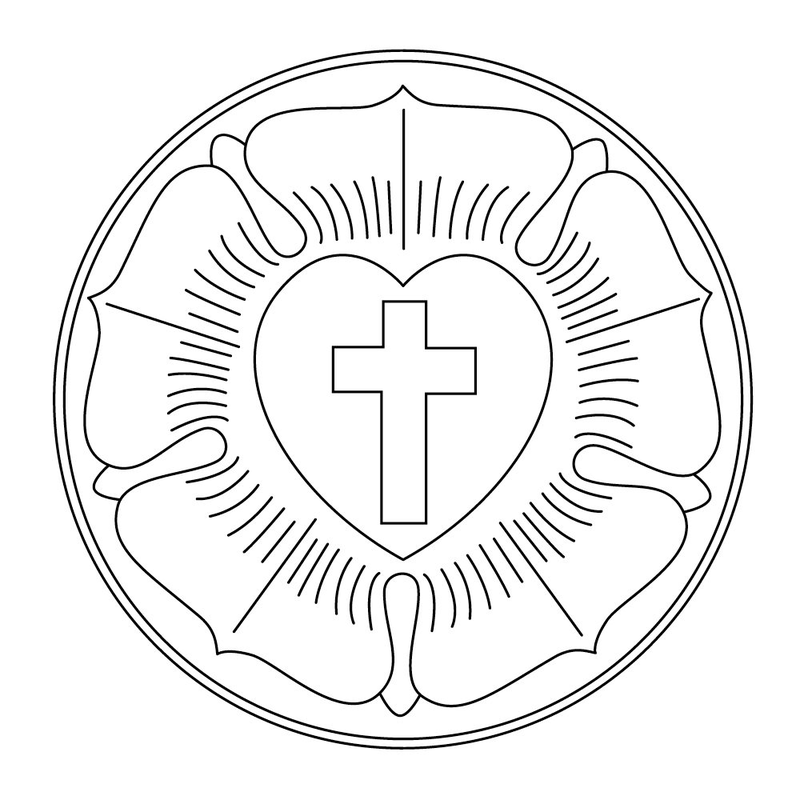